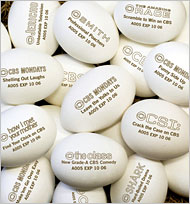 For CBS’s Fall Lineup, Check Inside Your Refrigerator

IN September, CBS plans to start using a new place to advertise its fall television lineup: your breakfast.

The network plans to announce today that it will place laser imprints of its trademark eye insignia, as well as logos for some of its shows, on eggs — 35 million of them in September and October. CBS’s copywriters are referring to the medium as “egg-vertising,” hinting at the wordplay they have in store. Some of their planned slogans: “CSI” (“Crack the Case on CBS”); “The Amazing Race” (“Scramble to Win on CBS”); and “Shark” (“Hard-Boiled Drama.”). Variations on the ad for its Monday night lineup of comedy shows include “Shelling Out Laughs,” “Funny Side Up” and “Leave the Yolks to Us.”